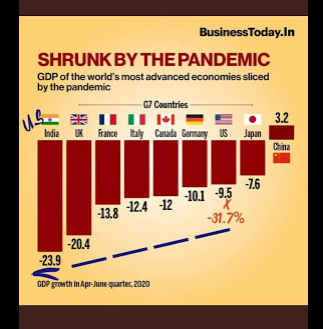 Fake News and Biased Journalism are both undeniable truths of these troubled times we live in. Haven’t we all complained after getting a migraine from the incessant screaming that takes place on the 9pm news on TV? As a centrist, I often find myself at odds with both the Left and the Right depending on what issue we’re discussing for the day. I’ve given up on Broadcast news and have settled for voices on the internet (Youtube!) that atleast make an attempt to be reasonable even if we’re at odds on a few hot topics.

India’s GDP fell an astounding 23.9% in the second quarter of calendar year 2020 compared to the quarter for the preceding year. It isn’t particularly unimaginable given the fact that we had what is being anecdotally described as the strictest lockdown in the world. But it is clearly a significant miss from what the consensus average estimate was: -19% according to data compiled by Bloomberg. I think this is news that has startled even folks that generally don’t follow financial news (such as my Mom). That TV news doesn’t think this merits a proper “debate” on prime time is a topic I wouldn’t dare get into for the fear of #justiceforssr warriors.

However, due to an interesting series of small events, I have ended up writing this article. Let me elaborate.  I’ve become an avid LinkedIn user. It’s not that I’m actively searching for a new job. But I feel it’s the last place left where people atleast pretend to behave on the internet and have civil intellectual discourse to avoid tarnishing their reputations. If only Twitter was this utopia! I scrolled through my feed where a Business Today news article popped up with this graph prominently featured. This graph had already been discussed earlier in the day on a WhatsApp group with my colleagues.

At first glance, one might interpret through this chart that India is the worst affected nation by CV-19 lockdown. How successful these lockdowns were for us w.r.t. containing the spread & whether they were essential at all is a debate that I’m sure has reasonable and valid arguments on both sides.

I guess you wouldn’t be reading this had I not clicked the accompanying twitter link! Twitter is a vile place. Sometimes when I’m having a bad day, I read troll comments just to make myself feel better.

Pivoting back to the comments on this Business Today post on twitter. It had several comments that screamed Fake News & put up an alternate chart claiming the Left Liberals have stooped to manipulating statistical facts just to suit & propagate further their narrative of Modi’s mismanagement of our economy.

Had these been simpler times, where Facebook didn’t interfere with elections and where it flagged fake news as fake news and not called it “freedom of speech”, my mind would have just discarded these comments as venom spewed by idiots who don’t know what they’re talking about. I’d obviously rely on the magazine that tweeted the chart. Business Today is a renowned financial brand after-all.

But we clearly aren’t living in this ideal fairy tale and hence at 2am in the night I decided to take over this investigation of who’s right and who isn’t. I messaged on WhatsApp the 2 economists I have access to Nikita Talnikar & Preksha Jain, two of my colleagues, whilst conveniently ignoring the fact that its 2 am! But I guess some liberties are allowed with friends.

After a long day at work, here’s some stuff I learnt about the GDP growth rates:

Finally, I’m glad that Business Today had their facts right atleast w.r.t to their numbers. But to bunch India with these advanced economies just to create an infographic isn’t the smartest editorial decisions. I’d rather just reflect on India as its own entity and worry about where we go from here!

I’m glad I learnt some trivia on GDP from this whole episode, but the reason I deep dived is unfortunate: an environment of distrust and lack of integrity in news reporting.