I first paid for Netflix India in 2014. I had my dad’s credit card and I knew he wouldn’t delve deep into a $10 charge. Netflix wasn’t legally available in India at that time. I used a VPN service to mask my geolocation at all times while using the Netflix website. I’m no computer expert but I can follow complicated instructions very well and after processing all that technical jargon, my laptop was “virtually” in Europe and escaped any kind of geo-blocking.

Never before had I seen such a vast array of entertainment content in one place for me to explore. I was like the cliche: A kid in a candy store. Those were the years I was preparing for CA Final and this was a welcome distraction when I’d be done for the day or when I wasn’t in the mood for thick CA books filled with uninspiring prose.

When Netflix entered India in December 2015, my joy knew no bounds! I was cautious though, having educated myself over the years about the myriad world of TV licensing and release strategies in a phased manner across the world.

India actually saw Friends in the early 2000s. It had been on the air since 1994 in the US. We literally have so many generations who are fans of this iconic show because it still syndicates on ZCafe and Comedy Central at the same time! And now my brother, who is 17, has discovered it for the first time through internet piracy of course, and is loving it!

Getting back on point I celebrated Netflix’s launch in over 90 countries in the best way I knew: A celebratory Facebook post!

I immediately signed up for the India based account through my real email ID. But I was in for a disappointment like I had predicted. The library of content was a desert when compared to the lush Amazon forest that was the US Netflix website. But I decided to stick to the service, deciding to discover those obscure indie titles which I would never have got to know if not for Netflix. And now I had a job and my own credit card.

2016 was an okayish year for Netflix in India. They added a few subscribers. Nothing major. I pretended to love the fact I was part of the elite in India who shelled out 500 bucks a month for this gem.

December 2017! Amazon India launched the Prime service. Till then I’d always flirt with both Amazon and Flipkart. Enter Prime! and I think I haven’t bought anything on Flipkart since. Their 999 offer for a year was too good to pass! Amazon’s not Netflix. I knew that, but it was so much Value for Money. That was my momentary breakup with Netflix.

Amazon’s really serious about India. They made up big announcements for Prime Originals. Inside Edge was a decent fictional take on the world of Indian cricket. It’s also the longest duration for which I dared to see Vivek Oberoi act. They also had a bunch of comedy specials which they handed out to comedians in India like Santa Claus. The results were disastrous. Of all the comedy specials, the only one I actually enjoyed was Kanan Gill. That busted the myth of “Strenght in Numbers” strategy deployed by Amazon.

In contrast to Amazon, Netflix had just 1 comedy special which was undeniably more enjoyable than all Amazon put out collectively: Vir Das! The man’s been in comedy for over a decade now, he’s the ultimate big daddy of quality standup in India. His special on Netflix, “Abroad Understanding” was exceptional, to say the least. Again I celebrated that hour of gold with a post on facebook.

I’d momentarily hooked up with Netflix to watch the comedy special using a new account using my dad’s new card to get a free month. But then it sucked me back into reinstating my relationship with it as I binged Stranger Things and Orange is the new Black and The Crown.

Sometimes I wonder at how I and a lot of my contemporaries are a generation of Indians who have all their pop culture TV references rooted in American shows. Indian television is so bad, we’ve mass bunked it unanimously.

2018 was the year when the slow-brewing romance finally saw some action! Netflix and India were finally ready to commit to each other seriously and how!

The film appreciation bug inside me was having the best time of his life. I’d moved to Instagram now after having to face a lot of unwanted criticism on my oversharing habits on Facebook. But was I going to keep my opinions to myself then? Obviously not! I had just changed my platform. 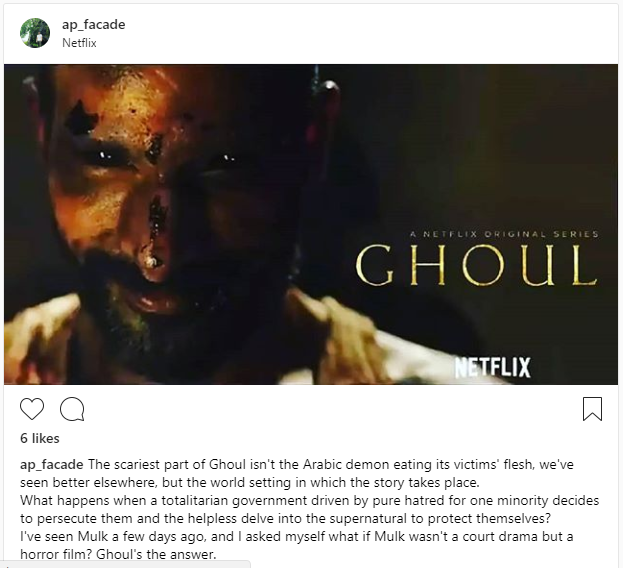 I look with hope and excitement which is barely contained as I read news reports of Netflix’s future plans for India which include the next 3 seasons of Sacred Games and the Bahubali prequel series. It’s like they finally realised how valuable the Indian market is for them and their future now that the US domestic subscriber base grows at a slower pace.

I would drive around the city and find huge hoardings promoting their shows and movies as if they are highly anticipated Bollywood event movies. I’d feel a sense of amazement about how one company can singlehandedly change our viewing habits! They basically invented binge watching.

Well, you might ask? Why this outpouring of emotion Amarjeet? All out of the blue! My friend shared a meme with me which made fun of a silly topic that’s trending:

The silliness of the meme was appalling. I love and adore the actor that is Radhika Apte and I could never be in a situation which was “too much” Radhika.

And then Netflix, like the knight in shining armour came to Radhika’s rescue with this super fun take on how “apt” Radhika Apte is for them.