The Cambridge Analytica scandal hit the news all over the world. Elon Musk spearheaded a #deletefacebook campaign. Arnab and his peers screamed in TV studios about how BJP and Congress both have allegedly used the services of this now infamous firm in the Indian elections in 2014. Mark Zuckerberg provided a public apology to all Facebook users for this breach of their privacy and promised reforms leading to higher protection standards in the future. Every journalist worth his salt wrote opinion pieces about how secure our data really is, in this day and age of social media.

Amid all of these happenings, I sat dumbfounded in the quiet peace of my living room trying to make sense of this barrage of headlines. My daily activity of looking at Whatsapp statuses of my contacts yielded something so accurate, something I really couldn’t express so eloquently however hard I might have tried. Sometimes a meme is just the right embodiment of all that you feel and wish to express.

Elon Musk has issues with Mark Zuckerberg since like eternity. These rich people sometimes do behave like the privileged teenagers from Gossip Girl, hatching revenge plots on each other. The basis of these conclusions was my due diligence on Quora. I really trust this website. The average IQ, in my opinion of people on Quora, is much higher than that of any other social media platform. Something worth noting, however, is that I’m the most viewed person for answers regarding “Koffee with Karan”. 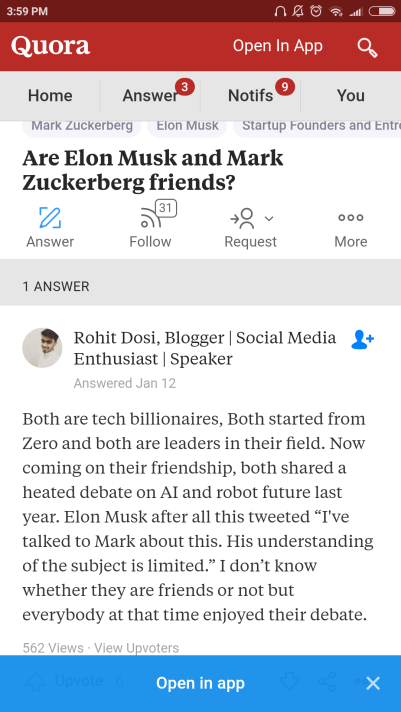 How could I just delete my facebook? I’ve been here since 2008 gradually learning how to cultivate a facade of the amazing life that I’m living. Sometimes when I look at my profile and scroll through days in a matter of seconds, I even manage to fool myself into actually believing my own bullshit.

I’m just too invested in it to now walk away from it. I’m too lazy to really write a diary and Facebook is the closest that comes to a pseudo-diary for me. I have life events marked, thoughts and quotes saved for supposed “future-use”. Things I want facebook to remind me years down the line: Amarjeet you were here with so and so doing so and so. It’s one of those must-have nostalgic pleasures to experience. Also, I’m one of those narcissists who uses the “only-me” post-privacy options.

My facebook oversharing reached epic proportions allegedly in December 2016, when I went on to have a spellbinding experience that was: Rajasthan. I would realise what my “friends” actually felt of this avalanche of videos, photos and posts when my “colleagues/friends” at PwC came down to Vodafone’s premises where I was working with a cake on my birthday a week later that read: “Happy Birthday Facebook.”

I took that in my stride. It was really thoughtful almost bordering on an intervention like the ones they used to have on How I met your mother. I truly believed I would come out transformed for the better after this wake-up call.

Well, I sort of did. I moved all my future posts to Instagram. It’s much prettier. I even love the ads in the stories of all the business handles that I follow. Moreover, it challenges me to come up with post-worthy pictures which have to be accompanied with meticulously thought-out captions that have to be intelligent and witty simultaneously.

I recently lost a lot of weight. I really refrained myself from clicking and then posting those “gym” selfies. That’s just too vain, even for someone like me. But then like the predictable person that I am in such matters, I clicked one. I even asked one of my friend’s opinions on whether I should post this. Her reply was I secretly knew already: It didn’t really go with the happy-go-lucky persona that I have. I moved on, burying this picture in the graveyard of my photos app, where lie in peace so many untold truths, doomed to obscurity till the end of time unless of course, they have the fortune of being included in #throwbackthursday post.

But something seemingly shocking happened. At the end of the day, as I resumed check-the-phone notifications routine, Google Assistant had this ready for me: A then and now, which I didn’t ask for. It was flattering for a second there, and then really scary, even Google knows I lost some weight. And then it hit me, Google could really publish an unauthorized but highly accurate biography on me if it chose to do so with all my search history, pictures, location data, emails, YouTube, calendar and notes.

But the very next second, I was sharing the picture on WhatsApp to my friend with whom I’d discussed the oh-so-melodramatic Shakespearean dilemma of “to post or not to post” and we had a hearty laugh or at least whatever “hahahahahaha” really signifies.

7 thoughts on “Ramblings of a Social Media Addict”