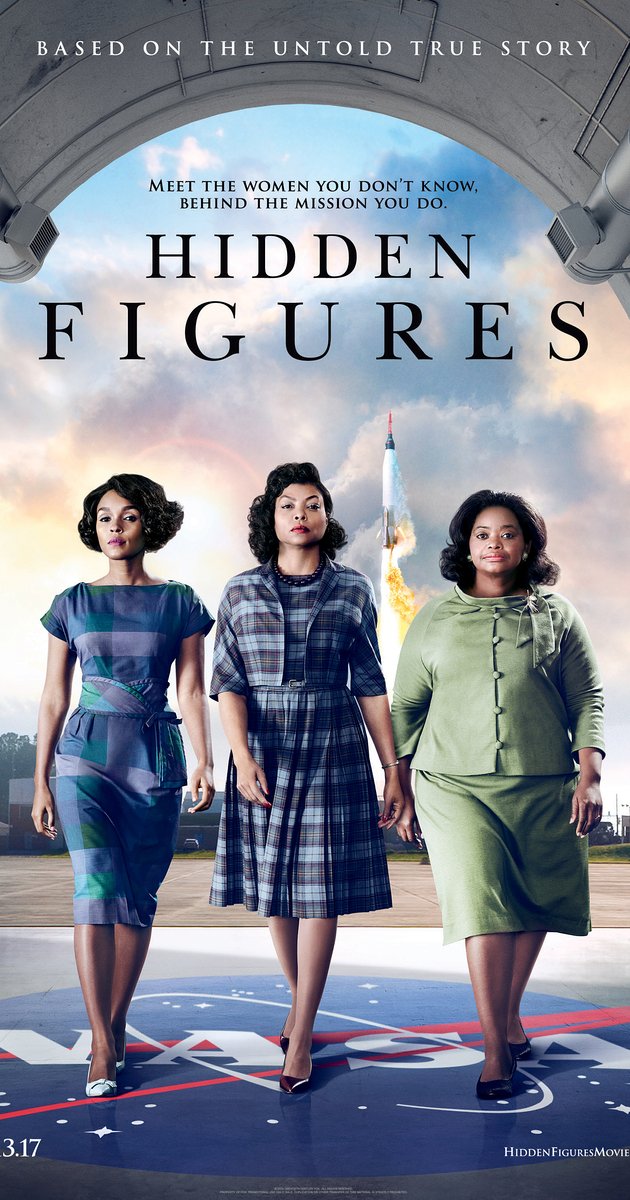 This is my first blogpost here on WordPress. I’ve always believed that I have a flair for writing. I’ve finally decided to explore writing as a hobby. When I put my thoughts to paper, on any topic, I feel joy, I feel relief.

I’m a person who reacts strongly to visual stimulation and movies are something which I strongly react to. I’m a cinema lover. I love my Netflix Subscription to death. What I love more is going as many times I can manage, to the cinema theatre and watch a movie with my bucket of popcorn and I prefer doing it alone.

I’ve always have had strong opinions and my facebook has always been a reflection of them. I have always made it a point, to express and share my reactions on watching a movie on facebook. It would always be a few sentences to sum my experience of watching the movie. But today I decided to go all guns blazing and wrote down my thoughts after watching Hidden Figures.

We’ve always known that racism exists in the world; it has since a very long time. Today things are much better they say, at least in relative terms compared to the earlier decades. We Indians as a society are hypocrites and racist, we have to accept that. But our cinema isn’t really brave enough to explicitly deal with these issues, it can’t, we have too many obstacles in the way. Even if an exceptional filmmaker made up his mind, he find it very hard to make the film that he really would want to make having to deal with the Censor Board, the various political outfits that I believe only exist and are only active when there’s a film dealing with something relevant to society and which will supposedly hurt someone’s “Sentiments”. So what choice as a movie-watcher do I have, turn to Hollywood.

Hidden Figures is the story of the contributions made by African American women to the NASA Space Programme and how they were the instrumental, behind the scenes working diligently, to launch a man in space and finally to make man walk on the moon. The movie decides to highlight the lives of 3 exceptional mathematicians: Katherine Johnson, Mary Jackson and Dorothy Vaughn.

The 3 female actors who play these characters respectively: Taraji P Hemson , Mary Jackson and Octavia Spencer are truly amazing in their portrayal of every emotion that these characters feel because of the discrimination that they suffer because of the colour of their skin. I didn’t find a single fake moment in the movie. In the contemporary world, America is known to be the leader of world; the “American dream” is such a widely known concept. We all look up to this nation in many ways. However we don’t really know in much detail about what America was and how it has become what it is today. The African Americans fighting for their civil rights, for me, mostly was a paragraph in my world history textbook in school. So this movie really shed some light for me on this aspect of American history.

Segregation as a concept that was so widely practiced in America then hit me really hard as a viewer. The propagation of “Separate but Equal” in daily life was baffling. In the beginning of the movie, when they show the signboard outside an office room “Colored Computers”, my brain processed that literally as a room for coloured computers. But the very next scene made it clear to me, computers was a job title for mathematicians who did complex calculations before computers that we know today took over and Colored meaning Black People. If this was surprising and educational for me, I found “Colored Restrooms” , “Colored Seats in the bus”, “Colored seats in the courtroom”, “Colored Section in the library” all the more shocking. There’s a really amazing sequence in the movie about how Katherine, who has been assigned to the Special Task Force as a computer, has to run all across the NASA campus to the West Wing just to use the bathroom as there is no bathroom for Colored people in the section of the building where she has to work. Her meltdown scene, on being questioned by her boss on the assignment on why she was absent from here desk, is truly something that hit me hard.

Being an urban millennial, I’m 24 and from a middle class background born and brought up in the city, I’m aware of our country’s tryst with our form of discrimination: Religion, Gender, Caste, economic status just to name a few. So relating to the movie’s core plot isn’t hard. I haven’t experienced discrimination first-hand (I’m Hindu, general category caste if I have to specify, Male, good economic condition because of a hard working father), but the manner in which the film deals with and portrays the intricacies of the day to day discrimination faced by the characters doesn’t make it hard to empathise with their plight.

The movie also explores their personal lives in a beautiful manner, allowing the audience to get to know them as people beyond the fact that they were intelligent African American women who worked hard at NASA against a lot of odds. Katherine is a widow, mother of 3 beautiful young girls, who has to support her family financially, acts both as Mom and Dad and how she eventually meets a nice man, a retired army soldier and gets married and goes on live a happy life. Mary’s views of fighting for her rights are very different from those of her husband’s, who has a more hard-line approach- The civil rights fight isn’t really civil. A standout moment for Mary is her amazing appeal to a court judge to grant her the right to study in a Whites only college in order for her to become NASA’s first female African American engineer.

The dialogues in the movie make the most impact. You’ll find yourself patting the character’s backs when they spill out those amazing, sarcastic, not so subtle words to make their point against the discrimination they are facing. Here are a few gems:

Also there’s another thing that I took away from the movie is the sub-plot of the IBM computer which as the movie progressed was going to replace the human computers. Al rightfully said “Progress is a double edged sword”. As a young working professional, I’m highly aware of was how the speed at which technology is progressing can change our lives for the better and also for the worse. Job security is really something we should worry about. We can work our asses off and yet we’ll be redundant when there’s a technological breakthrough that will make what we do to earn utterly useless. How we foresee these changes and how we react to them, will eventually decide whether we get washed away or we sail along with that tsunami of change. Dorothy’s arc of how she keeps her entire team relevant to NASA by learning the programming language for the IBM computer will definitely linger in your head after the movie.

5 thoughts on “Hidden Figures, the movie.”